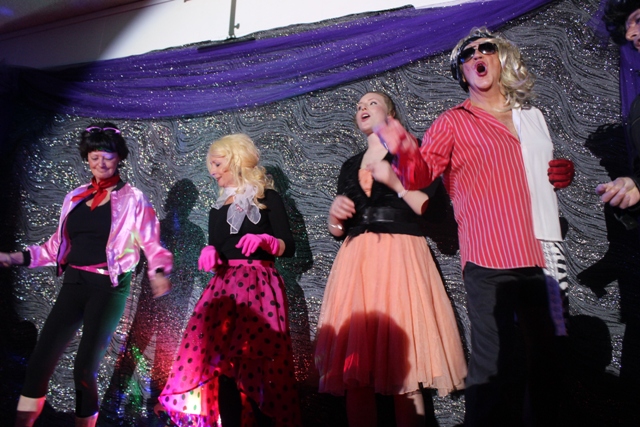 It was a fabulous night of glitz and glitter at the Canowindra Bowling Club last Saturday night with Tommy Jeffs and a merry cast of hilarious and enthusiastic, familiar faces taking to the stage in a final night in a series of fundraisers for the venue.

With performances of classic hits by the crowd-pleasing Talulah and renditions of a number of songs from the hit musical Grease, the audience had a roaring good time in the name of raising much needed funds for the town’s Bowling Club.

With almost 180 people in the audience, it was a sell-out night and probably one of the biggest crowds the Canowindra Bowling Club has seen in a few years. People travelled from Cowra, Dubbo, Parkes, Forbes, Bathurst and Orange for the show which was an accumulation of professionalism,
organisation and great entertainment.

Tommy has led the fundraising crusade with three big events that have raised a total of $15,000 which has been spent on new paint, a new dishwasher, new tables and crockery, new curtains and new carpet for the function room.
“The Club was in trouble,” says Tommy, “and that room was looking tired and run down. I just saw the need and now that I am living here and a member of the community, I wanted to do something. The function room is the engine room of the Club.”

Tommy has always been an enthusiastic community fundraiser and has raised over $1 million for charities in Australia. He covered the cost of food, entertainment and raffle prizes with a long-term goal to make the Club more sustainable. “I am so proud to be working with such a wonderful bunch of women,” Tommy said. “It was an absolute pleasure and after six months of hard work they have become lifelong friends. They say behind every successful
man is a strong woman, well the same goes for the Bowling Club.”