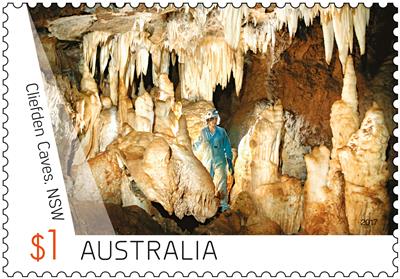 Australia Post is currently profiling four magnificent caves to feature on their new- est stamp collection, including the Cliefden Caves.

According to Australia Post it is the site of the first discovery of limestone on mainland Australia, in 1815 and houses an abundance of fossil deposits.

The stamp features the golden stalactites and stalagmites of the Clown Room in Cliefden Main Cave.

There will be a total of four caves in the stamp collection with the others being Wee- bubbie Cave located near Eucla in Western Australia, Undara Lava Tube situated in Undara Volcanic National Park, south-west of Cairns, Queensland and Kubla Khan Cave is part of the Mole Creek Karst National Park, north of Cradle Mountain, Tasmania.

Australia Post Philatelic Manager Mr Michael Zsolt said: “This stamp issue presents four highly significant caves from around Australia. Each stamp provides us with a glimpse into these spectacular underground environments. We trust this stamp issue will be of interest to all Australians, especially as three of these pristine caves are accessible only to experienced cavers.”