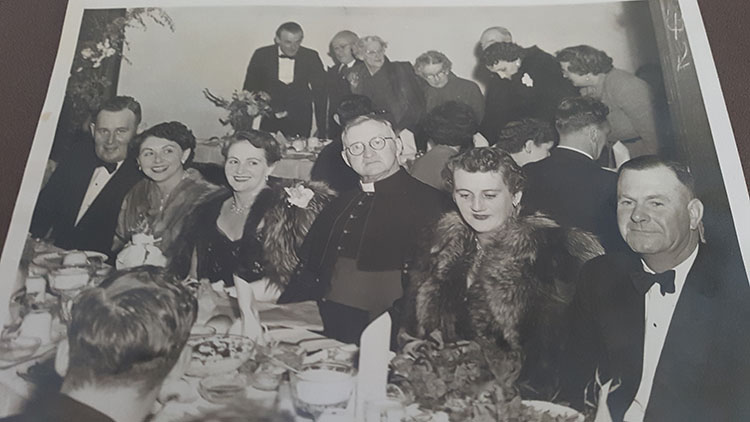 This photo was taken at a Catholic Ball in The Strand Theatre in Canowindra sometime during 1958.

Monsignor Brosnan was the Parish Priest, Mrs Grant was Matron of Honour and Madeline and Marie were the Ball Secretaries.

This Ball, being the first major function for the Parish to be held on a Friday night as previously, Catholic Balls were held on Monday nights because it was much easier to cater for, as it was during the time when it was forbidden for Catholics to eat meat on Fridays. At this particular function, the caterer served chicken and said “we will just have to bless it and call it fish!”

Monsignor Brosnan was Parish Priest at St Edwards Church in Canowindra from approximately 1944 to his death in 1961. He was born in Ireland, ordained in Dublin on June 24th 1906 and died on 27th June 1961 in his 55th year of his Priesthood. Monsignor Brosnan is buried in the Catholic portion of the Canowindra Cemetery and has a very elaborate headstone on his grave.

My husband Peter and I lived, grew up and married in Canowindra all our lives and moved to Orange in 1999.

I love receiving The Canowindra Phoenix each week to keep informed of all the news.

My father was James M Toohey, Stock & Station Agent in Gaskill St for more than 40 years.

Best wishes and keep up the great work you and your team do for the community .

Thanks to Trish Ryan for submitting this for our Way Back When Column, If you have something of interest please email editor@canowindraphoenix.com.au call the office on 6344 1846 or drop your photos in to 84 Gaskill St, Canowindra and we can scan them.