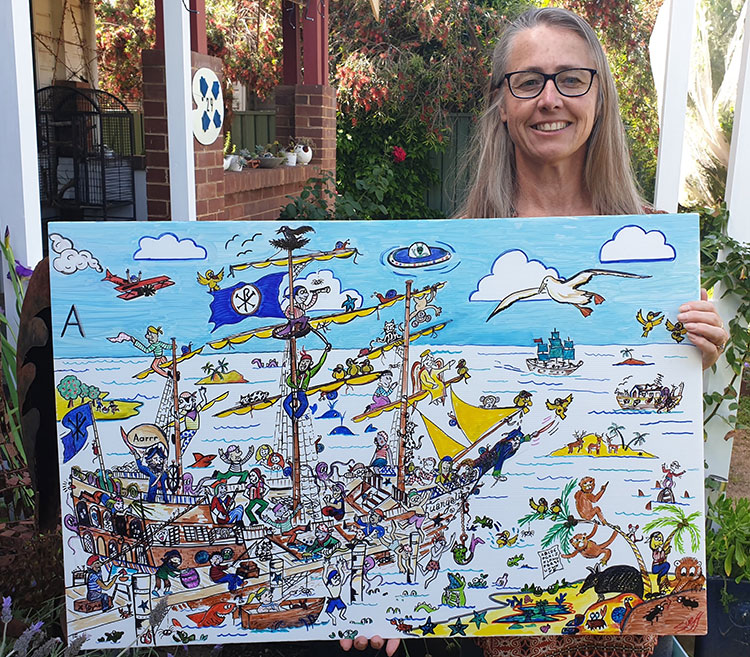 During COVID restrictions, Sue Hodge, lo- cal Canowindra artist, found herself with an excess of energy. “Without parties or social functions, I needed to find some way to use up my everyday energies,” Sue said.

Sue, being married to the famous Captain Barnacles, decided to do an illustrated series on the life and adventures of the Captain. Sue started by writing a poem based on the alphabet and the Captain’s life and it grew from there. It is now a set of 26 illustrations which will be exhibited locally in the last week of November and first week of December at the Canowindra Art Gallery.

The poem accompanies the series of panels, which follows Captain Barnacle’s journey from setting sail on the Euangalion, to encountering monsters of the deep, to finding lost treasure and finally returning safely home.

Each panel is based on a letter of the alphabet from A-Z, beginning with panel A which includes many objects which begin with the letter A. The following illustrations continue in the same manner going right through to the letter Z. Viewers are given the challenge of finding as many objects as they can which correspond to the letter displayed on the top left hand corner. There is also a number based challenge which involves counting objects and working out what number they add up to. Both kids and adults can have fun naming and counting things in what has been described as a cross between ‘Where’s Wally’ and ‘Animalia.’

Sue would like to thank the Bullock family for providing inspiration and her patient husband, who endured an alphabet obsession.

All those who attend the exhibition are in for a lot of fun and a chance to win a ride with the Captain on his Harley and sidecar!