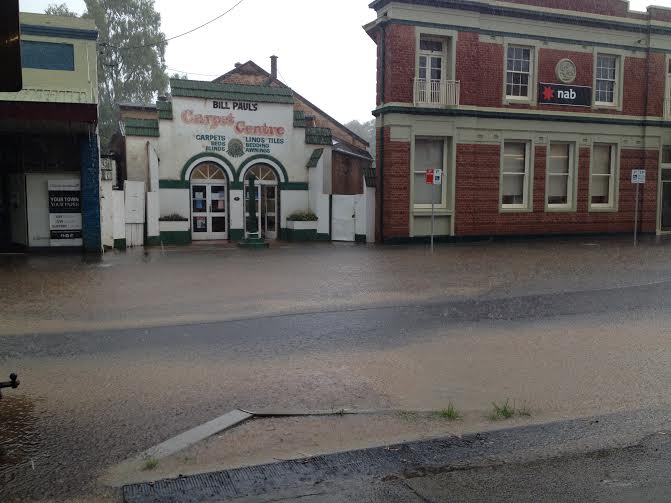 Late on Friday afternoon, Canowindra received another large downpour of rain with over 35mm being reported in just over half an hour. This is the second flood in three months, although luckily this time there was no hail with the accompanying storm.

Despite efforts by Cabonne Council over the past few weeks to rectify the problem in Gaskill Street, there was very little difference to how the flooding occurred and the damage to businesses that received more water into their shopfronts. The businesses which sit around the wheelchair access ramps across the main street were the most particularly affected.

It seems that now Cabonne Council will have to try Option B, which is to make the grates bigger than they currently are. Looking at the volume of water, it is clear to see that this is not the only problem the Council will need to look at.

The following questions are raised: are the pipes large enough to cope? Why don’t the buildings have downpipes and gutters? Why are certain downpipes not actually connected to the stormwater pipes?

The biggest consideration to be made is the impact of the wheelchair access and how the water banks up around this and cannot get away quickly enough, causing subsequent flooding. “We have had a lot of rain in the past, and it is only since these access ramps have been installed that our buildings have been flooded,” said Bill Paul who has been in the main street for over 40 years.

We need this problem rectified as soon as possible. Cabonne Council is meeting with concerned business owners today, hopefully with some answers!