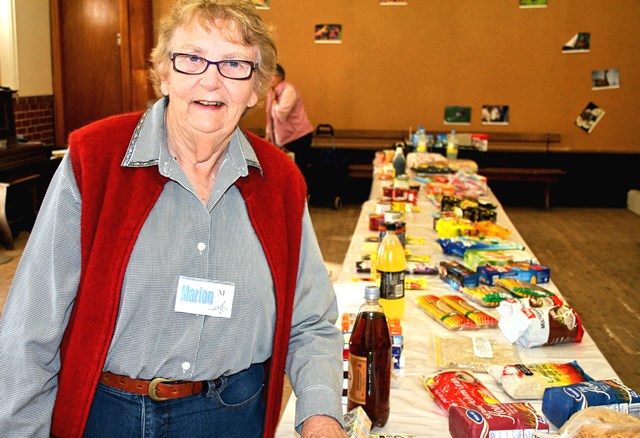 When you look around Canowindra these days it’s not that easy to appreciate that a third of our population exists on around $400 a week – roughly $14,500 a year. “That doesn’t mean they’re suffering or unhappy,” says Marion Wilson, who heads the 46 volunteers running the Uniting Church’s bi-weekly Food Basket from its hall in Blatchford Street. “But it means they’re economically stressed and even in a small town like ours there are people who fall through the gap.”
It’s because of this economically marginalised segment of our community that the Food Basket was launched in October 1999 offering an astonishing range of groceries every Friday that are well below retail prices. Indeed, basic selections cost $10, $15 or $20, depending on the volume, and the $20 bag is actually worth $70 in the supermarkets. These are “service charges,” not the price of the goods, and for many of the regular clients they’re the difference between reasonable comfort and a poverty-line existence. Marion says there are around 320 residents registered for Food Basket supplies, and between 20 and 35 shop there each week. The fact that they pay for the groceries is fundamentally important to the service. “The people feel safe coming here,” she says, “and they’re not branded as charity recipients. It gives them pride that they pay a service fee.”
The Food Basket receives support from Cabonne Council and the Canowindra Lions Club. The service launched itself on a $1,000 contribution from each of the Anglican and Uniting churches and, says Marion, “we repaid it in 12 months.” It gets its food supplies from the NSW Food Bank in Sydney, which has warehouses “the size of two football pitches.”
“But the bank can’t sell the food,” says Marion. “It charges us a service fee. And that’s why we charge our clients on the same basis. Our support is offered within the Christian perspective – providing a service for the poor and marginalised people of the community that’s consistent with the Gospel.”
By Derek Maitland