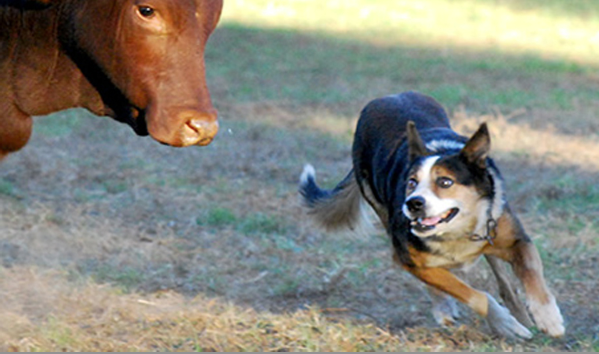 The Canowindra region’s toughest, most hard-working and, many would say, most loyal working dogs are about to show off their skills with the first cattle dog trial to be held in this area.

As many locals would know, this test of canine stamina, discipline and intelligence is similar to a sheep dog trial except that it’s conducted by dogs originally bred from English dogs and Australian dingoes, and they deal with far bigger, heavier and often more contrary beasts.

However, their days are somewhat numbered as working dogs, with less temperamental kelpies and border collies taking over, and competitive trials may well be the only place we’ll see them put through their paces in the future.

Says organiser Clint Oborn: “The dogs and their handlers have to direct three head of cattle around a course in a limited amount of time. “They are judged and scored out of a total 100 points.”And for anyone who’s familiar with the regular cattle cutting and penning trials that are held in Canowindra and the region, that’s neither a simple nor easy task.

The trial is being held at the Canowindra Showground on Saturday August 2, and the organisers are hoping to attract a crowd of spectators that matches the keen interest that’s been shown so far by the entrants. They’ve allowed for a maximum of 80 entries and according to Clint they’d received 62 last Thursday, “so we’re travelling pretty well and will definitely have a good turnout on the day.” In fact, entries close this coming Sunday July 27 so if you’re interested get your bids in now to Amy Cutler on 0248 352 494.

The event offers a total $1,000 in prize money and will be conducted over three categories – Maiden (first round only) with a fee of $12, Novice and Final $15 and Open and Final $18. The top six performers in each category will go into the finals. Clint Oborn says cattle dog trials are held regularly in the north of NSW and Queensland. “But we’re hoping to spark some interest locally with the hope that not only can we run our own event but also encourage other similar events in this [region]. “Although we’re holding the event in Canowindra it’s really an event for the whole area.”