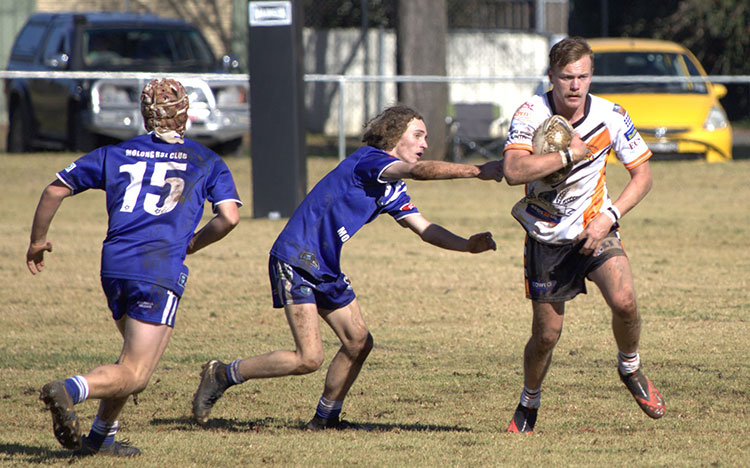 The Canowindra Tigers have completed nine rounds of competition, remaining undefeated with a strong win against Eugowra in first grade and youth league against Molong. The league tag Tigresses put in a great performance in winning their game against Eugowra.

For first grade, this was always going to be a tough encounter and it did not disappoint on Sunday. Solid defence from both teams trying to gain the upper hand in the opening 10 minutes. It was great entertainment for the large crowd in attendance. 10 minutes into the game, the Tigers thought they had a try after a pick up from a Eugowra kick saw Ryan Clark running 60m. Jonico Hardwick was supported to put the ball down under the post, but it was called back for an infringement 20m away.

It was Eugowra who went up on the scoring, with a try out wide which Ricky Winton converted to lead after 22 minutes. The Tigers put pressure on the Eugowra defence, which resulted in a try to Jonico Hardwick from a backline movement 15m from Eugowra’s line. Logan Harris added the extras and the score locked up after 26 minutes.

The Canowindra forward pack was starting to gain ascendancy, with many strong raids which finally paid off in the 33rd minute with a tip on from Ronnie Lawrence for Nathan Whatman who scored under the post. Harris converted for the Tigers to lead 12 points to six.

It was not until the 16th minute of the second half that the Tigers received a penalty, with Logan Harris slotting the ball between the post to go to 14 to six lead. The Tigers continued their dominance, with Jonico scoring a second try for the day in the 21st minute of the second half. It was converted and allowed the Tigers to slip out. Shortly after, Harry Meyers scored a try under the post which was converted to give the Tigers a commanding lead at 28 points to six. The final try of the day went to Jimmy Roberts, who was enjoying a very good second-half. Logan Harris converted and the score went to 34 points to six. In the closing minutes of the game, a penalty to the Tigers completed by Logan Harris brought the final score to 36 points to six.

The score probably does not indicate the toughness and closeness of this encounter, but the Tigers played with patience and, with continued pressure, they found holes in Eugowra’s defense.

Unfortunately, the halfback Ryan Clarke suffered a broken wrist. The Tigers wish him a speedy recovery.

The league tag Tigresses had a solid win against an inexperienced Eugowra team 48 to zero. Try scorers were Jess Fisher and Alicia Earsman with two each, Claire Wright, Amanda Friend and Erin Wise with one each and goals being shared between Erin Wise, Hayley White and Maddi Brooks.

Eugowra tried hard, but the Tigresses played some very entertaining football, with a number of passes in each try scored.

The youth league are also undefeated in a very solid performance against Molong 36 points to four. Only having the bare numbers, Molong were gallant in defeat, but it was the defensive effort from the young Tigers which was the most pleasing aspect of the match.

Luke Wheeler was good with the boot, converting six from six and had a great game at fullback, stopping many opportunities with good carries from the back. Sax-on Southwell had one of his best games as halfback and constantly found holes in Molong’s defence. All players put in a great team effort.

Next week is a group bye for the long weekend and our next home game will be on Saturday, 19 June against Condobolin.