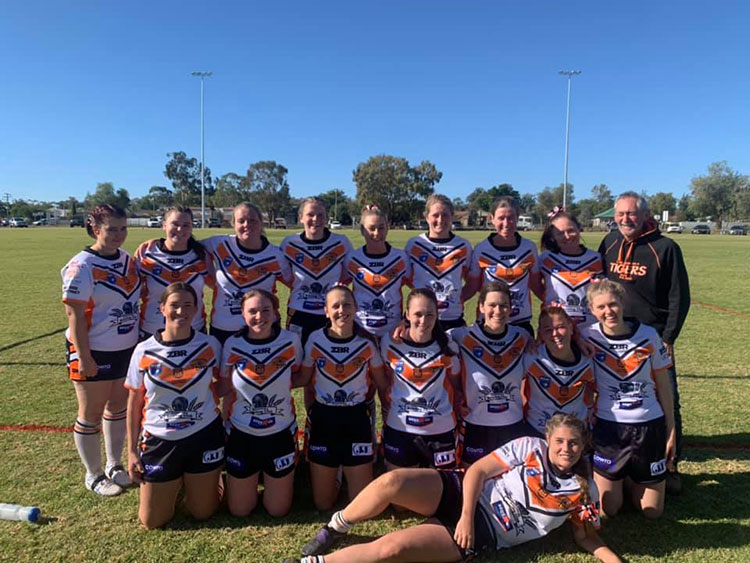 Canowindra travelled to Peak Hill last Sunday. Although a little cool, it was a sunny afternoon and the Tigresses started off the day on a good note,with a well-earned win against Peak Hill.

Canowindra opened the scoring with a try from Caiten Dixon. We went to a four nil lead after eight minutes. Maddie Brooks was next to score with a conversion from Hayley White, stretching the lead to 10 to zero. Kelly Price scored a four pointer which was converted. There was some great teamwork which put constant pressure on the Peak Hill team.

Half time score saw Canowindra lead 16 to zero, holding out the Peak Hill Roosters with strong defence. Canowindra scored early with a try to Jess Fisher and held a strong lead of 22 to six.

At this stage, the Peak Hill side had more possession than the Tigresses and staged a comeback with two tries, but Canowindra held strong and were unlucky not to score a couple more tries only to be called back. Canowindra finished the game 22 to 18

Canowindra Tigers had a very strong win against Peak Hill, after five players were backing up from the Woodbridge Cup representative team.The Tigers struck early with a try to Brenton Clements, only to be ruled a knock-on. After play see-sawed up and down the field, an intercept from Callum Clyburn changed momentum with a 70 metre run. After two plays, Aaron Earsman scored the first try and Burns converted to lead six to zero. Canowindra lost Emmanuel to a leg injury just as he was gaining more confidence. This brought about a positional change and Peak Hill hit back with a try, to only trail by two.

With good play from Canowindra, Nathan Whatman scored next to the post and the Tigers stretched their lead to 12 to four. The Tigers’ defence held strong from the raids of Peak Hill players, particularly the Earsman brothers, through the middle supported by Blake Nurcombe and Ronnie Lawrence. In attack, strong runs by George LoLo, Ronnie Lawrence and Louis Dwyer constantly put pressure on Peak Hill on the edges.

Ned Stevenson had his best game, with strong runs out of the Tigers 20 and open play supported by Jonico Hardwick playing at fullback, stopping many movements from Peak Hill. Tries to Ned Stevenson and Callum Clyburn pushed the score out to 24 to 14. Peak Hill scored twice in the second half to stay in touch, but the Tigers were in control. Nathan Whatman was awarded player’s player.

This weekend, the Tigers are at home, playing against Grenfell with three grades playing. Gates open at 10:30am.