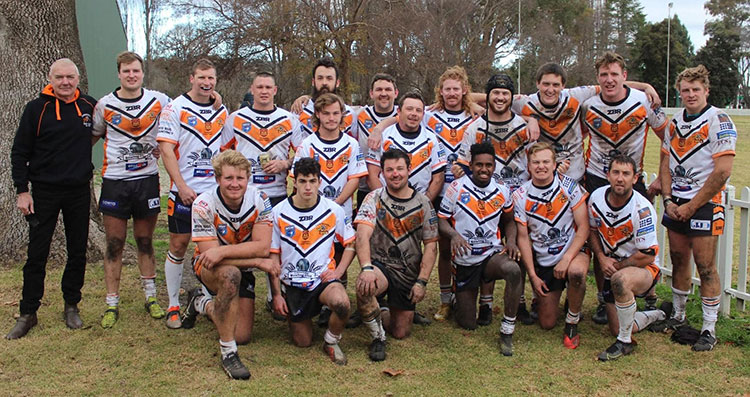 Canowindra put up a great first half performance last weekend to take control of the game, scoring some of the best tries this season. Molong are always tough opponents at home and while this was the case, the score did not reflect this. The Tigers ended up scoring eight tries to three due to great teamwork.

Canowindra opened the scoring with a try in the seventh minute to Lewis Dwyer which was unconverted. Shortly after, in a great backline movement, Tim Roberts made a dash down the left-hand side and found James Dine who scored the first of his three tries. It was converted and the Tigers pushed their lead to 10 nil at the 12 minute mark.

James Dine’s second try came through a good ball from Logan Harris to take the Tigers’ lead 14 points to zero.

Shortly after from high up and under, Logan Harris caught the ball on the full to offload to Dine and push the score to 22 nil.

The Tigers had a good share of the ball after another backline movement. Clements, though he caught short of the line, was able to throw the ball inside to be picked up by Earsman and Ronald Lawrence, then offloaded to Nathan Whatman who shot the Tigers out to 18 points to nil.

Molong hit back with two tries of their own in the 30th minute. Both were converted to close the gap to 10 points and it looked like Molong were making a comeback late in the first half. From a clearing kick, Molong made a mistake and Burns offloaded to Whatman to score his second try which was converted, bringing the Tigers lead to 28 points to 12 at the break.

Second half was a more tired affair, with both sides trying to gain the upper hand. Molong tried their best to overcome the defense of the Tigers.

At one stage the Tigers held Molong out for 18 tackles on the line. It was a great effort and it was not until a mistake from the Tigers that Molong, through good ball work, scored a try out wide. This was converted to bring their score to 18.

The Tigers once again worked the ball well into Molong’s territory from a good backline movement. It was Kain Earsman who forced his way over bringing Canowindra’s lead to 32 points to 18 midway through the second half. The Tigers stretched their lead, with a try to Whatman— his third to finish off a good game.

The Tigers held onto their lead, finishing the game 36-18.

This was a great effort as the Tigers’ numbers were down thanks to injuries and COVID restrictions which made a player unavailable. A big thank you to the juniors backing up on the day. Player’s player was awarded to Lewis Dywer.