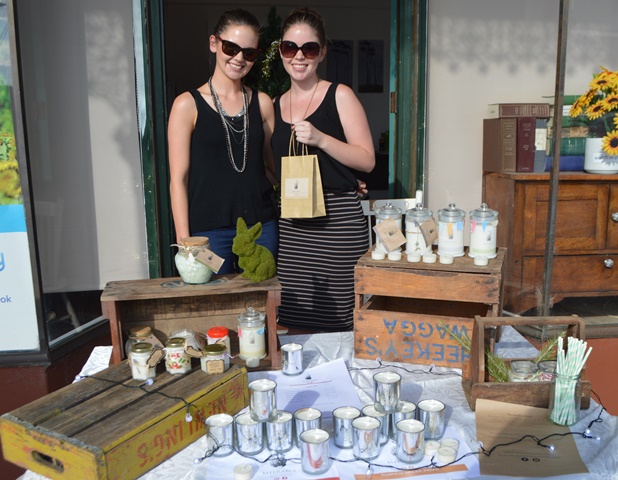 On Friday at 5pm the first ever Canowindra Shopping Night began. Businesses stayed open until 9pm and there were even a few pop-up stalls such as Chris and Nerida Cuddy’s Perennialle Plants. Jess Jenkins also chose the night to launch her new business Meeraboo Candles, setting up a stall outside Adloyalty where you could smell the spiced pumpkin and apple cinnamon soy candles, almost good enough to eat! “Mum and I made them on Wednesday so it’s all been a bit rushed!” said Jess. The candles are 100% soy and embellished with a professional tag complete with the Meeraboo Logo- a picture of Jess’s rabbit. The event was mainly organised via Facebook meaning the shop owners utilised their own pages to promote the event. Canowindra Business Chamber President Eddy Wilkinson was pleased with the overall result of the event, “generally it went well and most people were happy. It was arranged at fairly late notice and was viewed as a test run to see if there would be enough enthusiasm to give it a proper go next year. There were some nice surprises like Virginia Cullane’s Book Shop opening late and the candle pop-up stall. This was an experiment with a positive result” he said. “Next year we’re looking at getting more input, involving more businesses and hopefully seeing an even better response!” Eddy continued. If you would like to have your say in the next shopping event get in contact with the Business Chamber or stay posted for their next meeting
By Rhi Quinn