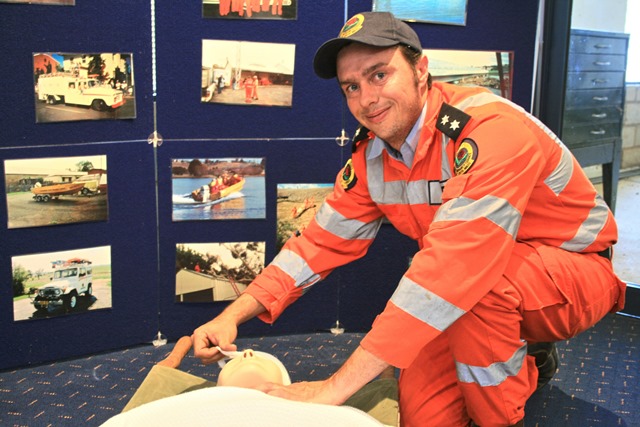 If you’ve got anything orange in your wardrobe, put it on for WOW Day next Wednesday to once again proudly support the 40,000 State Emergency Service volunteers throughout the nation.
And while you’re at it, give a thought for our own SES unit here in Canowindra and the crisis that it’s facing at the moment – a lack of volunteers that’s forced the team to cut back on the crucial services it provides in protecting our community.
According to the unit’s deputy controller, Cameron McKenzie, the group currently has only six active members, having lost eight other volunteers who’ve moved on from Canowindra to other areas in recent times. “We’ve had to de-register for road crash rescue and focus on our other core roles, storm, flood and lightning damage,” Cameron says. “Luckily we have the Canowindra Fire Brigade filling in for us on crash rescue.”
Cameron makes no bones about the seriousness of the situation. “The unit is struggling,” he says. “We need more volunteers to bring us back up to strength, and we’ll be running a media recruiting drive through Wear Orange Week and the period after to try to attract more Canowindra people to join.” Volunteers can be any age between 16 and 60, Cameron says, pointing out that elderly retirees can play a valuable role manning operational communications. Cameron himself joined the Canowindra SES two years ago, and says the decision was prompted by his partner Kim Roberts.
“She’d joined as a volunteer several weeks before, right after a major flood, telling me ‘it looks like the SES needs me’.” it certainly did. Their first year featured the massive Christmas Eve storm which hit Canowindra at 5pm. “We had 40 requests for assistance and teams of four volunteers out until two in the morning dealing with damage, mainly fallen trees,” Cameron recalls.
By Derek Maitland
IMAGE: Cameron McKenzie with training dummy at Canowindra SES centre