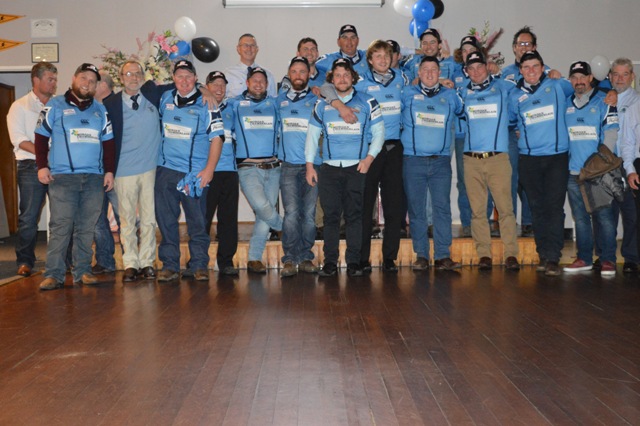 The Canowindra Pythons have gone out with a bang in 2016, as they concluded their season with a presentation night last Saturday. It was a night of celebration as the Pythons reflected on what had been a tough year.

This year the night included a special honour, with Graham Rice being awarded life membership. Graham has been involved with the club for 10 years now with roles ranging from treasurer, coach, trainer and assistant coach. Graham says, ‘I’ve also played a couple of games when I was 57 when they were short’.

Pythons player Mark Brown presented Graham with the award and commended him for his involvement with the club over the years. Grahams appreciation was shown with a standing ovation and a roar of applause. “It was a bit of a shock but it was a great honour,” said Graham. Other standouts from the night were Alex Gavin, Jacob Baker, Dean Schaefer and Todd Wyburn who all received two awards or more.

The most prestigious award being the Chris Noble Memorial, which was presented by Ross Noble, was awarded to Todd Wyburn this year for being the most inspirational and helpful player. The night was a great turn out of 65 people to help celebrate the Pythons year. The Pythons would also like to thank the Walla Rugby mums who catered for the event, pleasing everybody’s appetite. Greg Ashton won the 2015 Rugby jumper that has been a fundraiser throughout the year, which was donated by the Bottle Shop.

The Pythons saw a hard year with new teams being introduced into the Graincorp Cup as well as some players being out due to injuries. Doug Rice had a great year of coaching but has decided to hand the role over to someone new for the coming year.

Overall, Graham is pleased with how the club is looking. “Rugby is going from strength to strength with hopes of entering an U13’s team in the Central West comp, and it has been years since this has happened. Also, the Pytho- Netties netball group has been a great contribution to the Club,” he said.

Awards on the night went to: