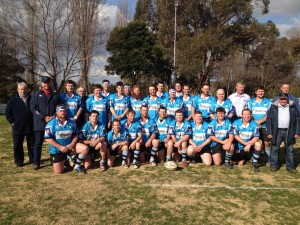 The semi-finals for the Southern Division Graincorp Competition were under way on the weekend with the Canowindra Pythons dominating in a win over the premiers Molong Magpies. The Magpies came out strong in attack to gain the first points on the board but it wasn’t long before Jack Knight palmed off defence to even the score 5-5.

With the Pythons all working together Ed Price was able to make a break down the sideline to then offload to Tom Roth to score getting in front 10-5. Jordan Irvine and Ronald Lawrence both played well making some strong hit ups bouldering over the Magpies defence.

Ed Price continued to work well on his feet as he found a gap close to the line to score next to the post and Tom Roth successfully converted. The Magpies charged back with a try just before half time leaving the scoreboard 12-17.

After the half time break the Pythons came back out with force with the realisation of winning and progressing into the finals. The whole team came out strong which led to Craig McKenzie charging over the line to secure
a try and Tom Roth successfully converting making the score 12-24.

The Magpies weren’t giving up either swooping in for another try to nearer the score to 17-24. With minutes to go Adam Nash and Clayton Maynard were strong in defence holding up a number of tries until the fulltime bell rang
leaving the Pythons victorious with a win 24-17. The Pythons now progress to the finals playing against Condobolin. A supporters bus will be travelling out to Condobolin and if interested please contact Rob Morris.