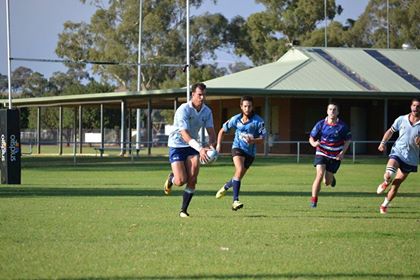 Last Saturday the Pythons hosted competition favourites Temora. The afternoon kicked off at 2pm with the Temora women’s side taking on Orange Emus in an entertaining game of footy. Temora got the win with plenty of players on the bench proving
the difference.

In the men’s game the big Temora pack with a quick backline surprised the Pythons in the first half running in 5 tries to the Pythons
1, with Ronnie Lawrence busting his way over the line.

After a chat at half time the Canowindra boys came out a lot stronger and muscled up against the Tuskers and took a little more control of the game. Though after the first half onslaught the Pythons never mustered enough points in the second stanza.

Although Ronnie crossed the line once more and young Harry Jeffries proved he is more then up to the challenge of the open grade and crossed for a great try also.

Plenty of players had great games with the Watt boys Mick and Luke having huge  impacts also Hayden Ewart, Alex Gavin, Kiwi Steve and Tommy Lamond all getting through plenty of work in the forwards and in the backs Freddy Trengove, John Grant and Jack Grant played well.

Points for the week went to: 3 points to Jason Beveridge, 2 points to Ronnie Lawrence and Players Player and 1 point to Dan Bowd and Harry Jeffries.

This weekend is a general bye, the boys head to Harden on Saturday 5th May for what should be another great game with Harden undefeated so far this year.