Home » Canowindra On Map As Farmer Seeks A Wife 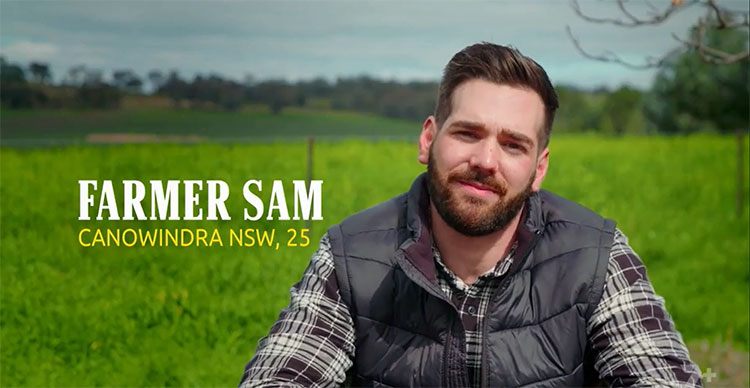 Channel Seven’s show Farmer Wants A Wife features “Farmer Sam”, who is portrayed as a farmer from Canowindra, and has helped put Canowindra on the map to a national audience Image: Channel Seven.

Despite rumours that “Farmer Sam” is not actually from Canowindra, the current season of Seven Network’s hit reality show “Farmer Wants A Wife” has helped put Canowindra firmly on the map to a national audience.

The show features five farmers looking for love and in its 10 seasons in Australia, it boasts nine marriages, one long-term relationship and 23 babies. With statistics like that, many trust the franchise more than they would other reality show drivel. Since Sam’s role on the show first surfaced late last year on popular social networking app TikTok, the Canowindra community has been eagerly awaiting to see what the show musters up for its town.

While the town has been going through severe Telstra network issues, it is clear that the old bush telegraph works as well as it ever did, as word passed through paddocks, over fences and made its way around Australia, thanks to the power of the world wide web.

Despite unverified rumours on social media of staged farm scenes in Canowindra involving Farmer Sam, first impressions of the show’s portrayal of Canowindra have been positive, and will undoubtedly serve as a major coup for the town with its regional tourism.

Farmer Sam’s family own a property near Canowindra, giving him a genuine connection to the land in any event.

So far the Woodstock Hotel and the Royal Hotel Canowindra have been used as locations to film the series. Manager of the Woodstock Hotel, Katie Piol had nothing but good things to say about working with the network, who she says made a donation which helped in much needed renovations to the building following a fire last year.

Perhaps the rumours online suggest Farmer Sam may not be from Canowindra, and may not be a sheep and crop farmer and if he is not, does it matter? Canowindra’s unofficial publicist Tommy Jeffs has been mulling it over all week.

“The rumours were on the ground last year. That is why I am surprised they went ahead with it,” said Tommy. “I hope it does not hurt his family, because his brother and his wife live here and are beautiful people. Aussies like it upfront and honest. If there is a bit of deceit there that is a bit of a worry.”

Tommy is proud to see Canowindra and its undulating hills, lush pre-harvest paddocks and historic main street on screen, a feat Tommy has accomplished himself through tireless media promotion.

“Any publicity is good publicity. We should be proud that they wanted to film out here,” Tommy finished.

For its part, the Seven Network are reaping the rewards, sweeping the ratings on Monday night and demonstrating Australia’s enduring love of the bush. For Canowindra’s part, locals have to agree that our town scrubs up very nicely indeed and nothing beats a canola paddock in spring.