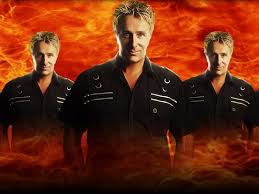 Steven Spellmaster mesmerised the crowd at the Services Club on Saturday night during his hypnotic audience participation show which included dinner and dessert. Spellmaster is the most popular comedy hypnotist in Australia today and has performed on shows such as Hamish and Andy and The Footy Show.

Twelve people were brought up on stage by the comedy hypnotist and seven ‘went under’, which led to escalating hilarity as the night progressed. People who were brave enough to be hypnotised included Jason Fliedner, who roared like a lion everytime he took a drink and Ash McSpadden who tried to milk herself. During the break Louise Beath wandered through the crowd, polishing bald heads before kissing them for approval and another gentleman had to stand up every time he had a drink and say, “I’ve got the biggest one of them all!” before sitting back down again.

Dan Friend drew some of the biggest laughs, hunting frantically for his backside and asking everyone if they had seen it. Participants also thought they were famous actors and models, posed for the crowd, demonstrated their favourite dance moves and at one point there was even a strip tease! “We will definitely have Steven back here to perform again,” said Julie Fliedner, Office Manager at the Services Club; “It was a hilarious night.” Well done to all who volunteered to be put under Steven’s spell and thank you for providing such wonderful entertainment. You’re back in the room!