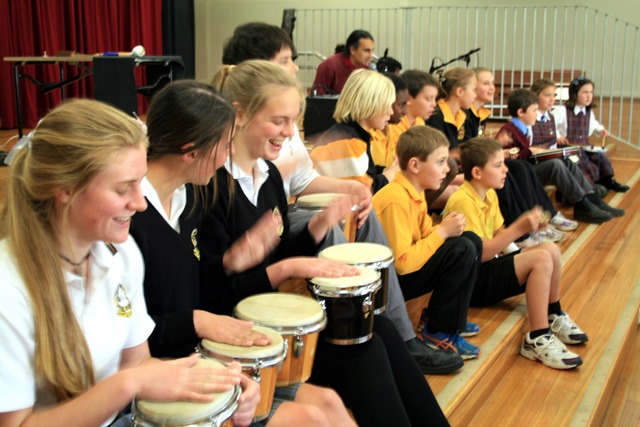 Do you know what an “Islamic guitar” is? Or a South African “thumb piano? Or perhaps a “triangle with strings”?
A lot of Canowindra’s schoolkids can tell you a lot about them after experiencing the incredible musical talents of composer, instrumentalist and singer Kim Cunio at the Canowindra Public School hall this week. Kim was in Canowindra with his partner, folk and traditional songstress Heather Lee, to present a Sunday concert – “Medieval Music and Beyond” -at Taste Canowindra, featuring their acclaimed ancient and traditional music and song. It was at two solo performances staged on Monday for pre-school, primary and high school pupils that he initiated them into the mystery and beauty of some of the many medieval and traditional instruments that he’s learned to play since he took up his first one, the recorder, when he was eight.
One after the other, he thrilled the kids with their music – the 1,000-year-old psaltery, for example, a “triangle with strings” that can be played with a bow or plucked. Then there was the ancient 16th century long-necked lute from Turkey – known as the “Islamic guitar” because it inspired the evolvement of the Spanish guitar in the 1800s. Among other instruments he played the medieval hurdy-gurdy, the Indian-Middle Eastern harmonium, and the world’s smallest, cheapest folk instrument, the Kalimba, or “thumb piano,” which is barely bigger than the digital tablets the kids work and play games on today.
“It costs about $5,” he told the young audience -an example, he said, of how poorer cultures are able to fashion their own unique musical instruments.
As for Kim’s favourite instruments? “I love the hurdy-gurdy because it’s so wild,” he said. “But my favourite is the modern piano. It’s so easy to learn while you’re engaged in other things in your life.”
By Derek Maitland