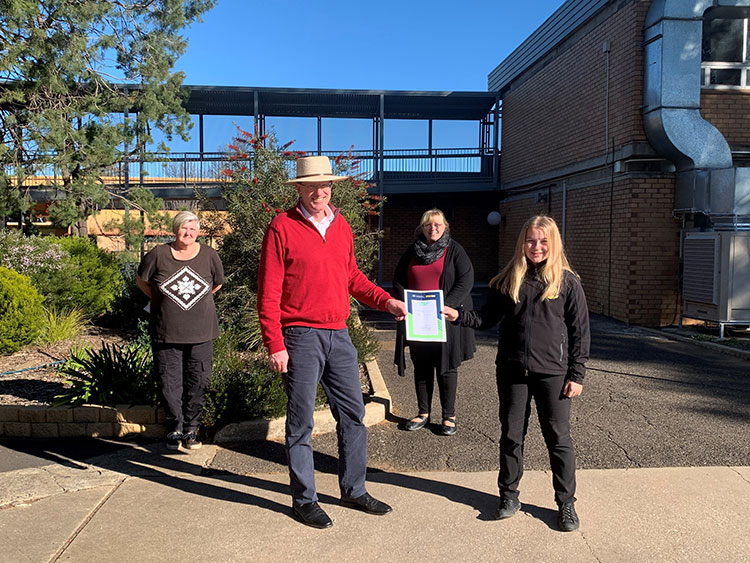 Local girl, Emily Thomas is the proud recipient of a $550 grant under Round 4 of the Australian Government’s Local Sporting Champions program.

Thirteen-year-old Emily, a champion in the under 15’s hammer throw received the grant to assist with expenses associated with attending the 2020 Athletics Australia National Championships.

Federal Member for Calare and Minister for Decentralisation and Regional Education, Andrew Gee made a personal visit to Canowindra High School last Thursday to congratulate Emily on her success.

“I’m delighted to have been able to catch up with Emily and her mother Annette to congratulate them on this wonderful achievement,” said Mr Gee.

“Emily’s hard work and dedication of training two to three times a week for over twelve months has paid off in her making it to the Nationals.

“It’s not easy juggling sporting commitments at the highest of levels, with school work, study and all the other things that occupy teenagers, including friends and family life, so I take my hat off to Emily for doing the hard work and getting to where she is today.

“I’d also like to congratulate her mum, Annette Thomas, the teachers at Canowindra High School and her coach, Ernie Shankleton for supporting her along the way. It’s been a great team effort,” said Mr Gee.

Ms Thomas was extremely proud of her daughter’s success with the hammer throw sport. “Emily started out competing in the discus, but then her coach, Ernie said she was more suited to hammer throw, which she took up.”