Home » Cabonne Residents Give a Clear Message to the Premier – It’s a NO to Amalgamation! 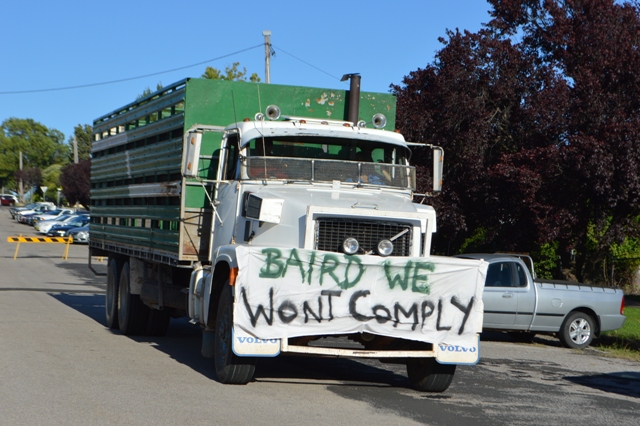 Over 400 people attended the protest and public forum held last Friday at the Molong RSL Club at 8 am to not only protest at the proposed amalgamation with Blayney and Orange Councils, but also to express this point of view and to articulate why they are opposed to such a merger.

The protest meeting was facilitated by David Macsmith and well attended by many local residents, Councillors, local media and State and Federal Members of Parliament.

The forum was heard before Richard Pearson, and many asked that he take the
findings and feelings of the community back to Macquarie Street, to ensure that the people of Cabonne get a fair hearing. Over 111 people registered to speak, although due to time constraints and doubling up of information, the forum ended up with 80 speakers, considerably more than attended the same public form in Orange the day prior. It would appear that despite being initially ruled Fit for The Future, the Government then changed it’s mind and Cabonne Council became one of the Councils then deemed Unfit for the Future.

This was despite many other Councils in what could comfortably be called marginal seats and who did not meet the required criteria becoming Fit for the Future.
There is no consistency in these decisions and in fact, after listening to the speakers on Friday, one would have to wonder whether in fact the experts really do have a handle on the criteria and each individual Council’s financials.

There is no significant benefit, financial or otherwise, in a merger. “NSW Government savings estimates in the KPMG report grossly understate IT transition costs and artificially inflate purchasing gains through manipulation of modelling assumptions”, said David Macsmith, a local resident, and the CEO of a major software company who has done many mergers in the past.” He said, “you could double the amount of money quoted and double the
amount of hours required and then you may have a reasonable number, not the numbers quoted by KPMG.”

“Cabonne Council and residents are resisting the Orange City takeover with 93% of residents opposed in a recent survey.

The NSW Government’s forced amalgamation will, on day one, result in a loss
of $1,500 for every Cabonne resident and a gain of $500 for each Orange City resident.” David went on to say, “Call this what you like, but it appears to be as close as it gets to NSW Government sanctioned robbery.”

Cabonne residents also reject the forced merger because of cultural differences, the loss of rural representation and projected rate rise for Cabonne residents and businesses of more than 70% under NSW Government
supported rate equalisation. With Orange being one major city and Cabonne
9 villages, with 10km of gravel roads in Orange and 1200km in Cabonne and one Olympic pool in Orange and 7 small pools in Cabonne, the differences are obvious.

Cabonne has three female Councillors while Orange Council has none and Cabonne residents will have no female representation on any combined City dominated Council. With 26 code of conduct violations by Orange, governance is a serious issue.

The NSW Government is trashing Cabonne resident’s democracy and the National Party has shut down Andrew Gee, the anti-amalgamation local MP, so it’s now up to the people. Andrew Gee spoke passionately about his support and has told us he is prepared to continue the fight on behalf of the residents
of Cabonne.

Jock Haynes, representing ANTY very quickly demonstrated why the $29m of savings contained in the Governments merger proposal are not believable. He said, “NSW Government paid the consultancy firm KPMG $400,000 to produce the savings figures. It is reasonable to assume that KPMG charged the Government around $400 for every hour they worked on it. So, $400,000 divided by the average charge out rate of $400/hr, means they spent roughly 1000hr completing the report.

There are 35 council merger proposals, so that means they spent only 29 hours on each proposal. Given the $29million in saving they found this means that for every 1 hour worked, they found $1 million dollars. What we all find difficult to believe is that no one from KPMG visited or spoke to anyone in Cabonne Council to help them come up with these savings. In fact, the Government will not release this report, yet this very report is what all the figures are based on.

As a speaker said on Friday, “Is somebody cooking the book?” Other speakers mentioned the Health Services now available in Molong due to the support of Cabonne Council, what the loss of jobs at Council would do to each of the small villages and communities and the tremendous support Council offers all of the small community associations, swimming pools and events in the Council area. With a merged Council, and with limited representation for the current area if a merger was to occur, this would simply not happen and these areas would become the country cousins of the larger Orange.

We encourage all local Canowindra people to put in a written submission – all criteria are available at Canowindra Newsagency and submissions must be in by February 28th.
WE SAY NO TO A MERGED COUNCIL WITH ORANGE AND BLAYNEY – WE ARE FIT FOR THE FUTURE.