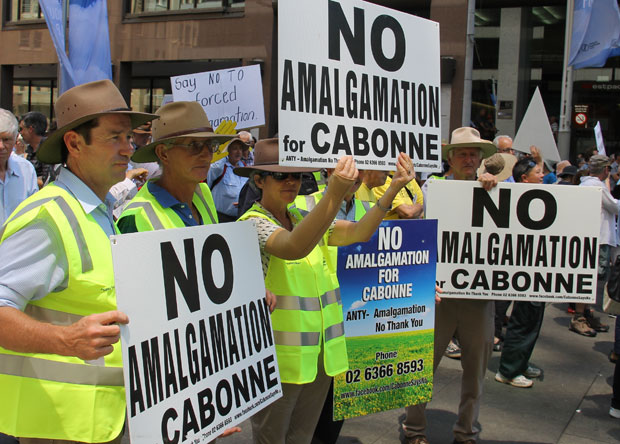 According to ‘Cabonne Amalgamation No Thank You’ Chairman, Jock Haynes, the following is a response to correspondence from a Cabonne ratepayer to the beset Minister for Local Government, Paul Toole, via the Office of Local Government.

Amongst other things that were allegedly quoted, three points were drawn upon: “While no decision has been made about the future of any individual council, the Government has made the following guarantees to give the community extra confidence that reforms will deliver tangible benefits and stronger councils:

1. Mergers will reduce waste and red tape
2. All the savings will go to better services, more infrastructure, or lower rates
3. Local representation will be maintained.” Jock stated about the response; “The first
two points are actually unable to be guaranteed, where is the regulation or legislation that they are enshrined in?”

Jock went on to say that the third point regarding local representation is worthy of further discussion, “what it means in my opinion is that in any merged council, for example Cabonne and Orange, Cabonne would have 12 councillors from their existing area and Orange would similarly have 12 councillors,” Jock said. “The Cabonne ratepayer to whom this information was sent has requested confirmation of what this really means, but of course no specific answer has been provided. Confirmation of this representation would be welcome for rate payer’s state wide who are concerned about loss of representation due to proposed amalgamations, but particularly those of us in Cabonne.”

Jock concluded, “If Cabonne have anything less than 12 councillors from their current area, then local representation will be not be maintained and Minister for Local Government, Paul Toole, will need to explain why his department is spreading further misinformation.”

For further information or a comment from Jock, please call 6364 1054.