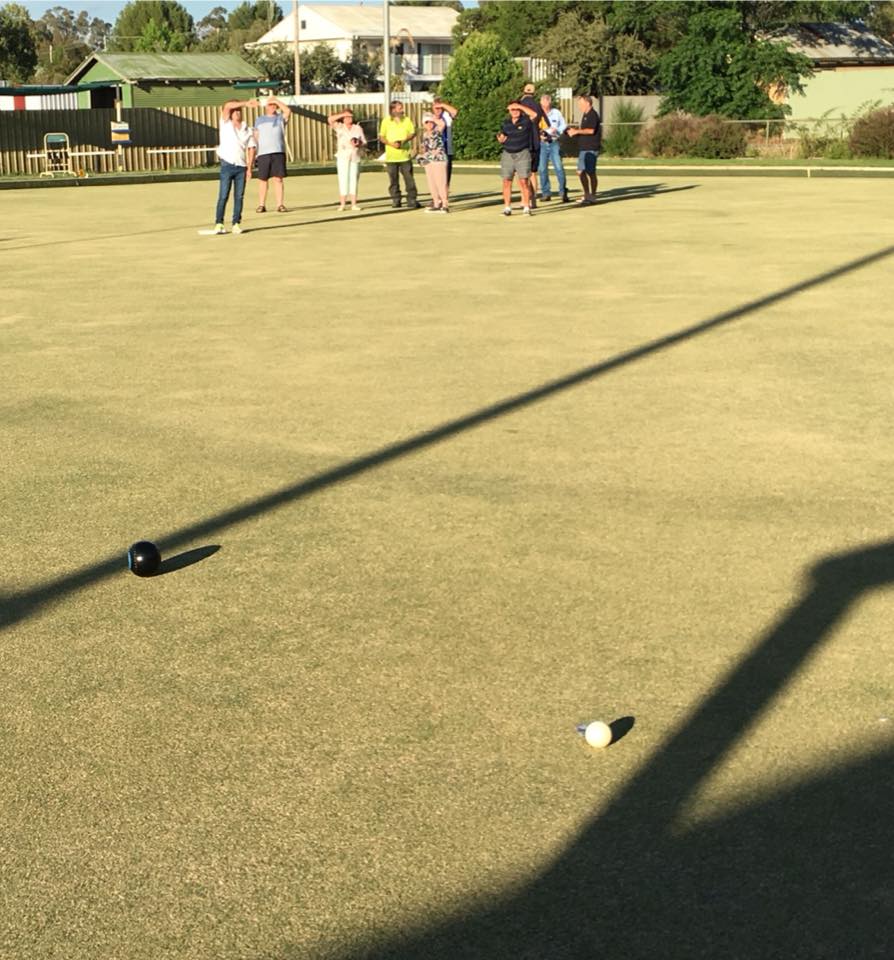 Last Sunday a mixed pairs match was played with Peter Taylor and Jenny Middleton against Crock Watt and Ann Zaino where Peter and Jenny had a comfortable win 40-22.

Friday December 1 – Be here early if you would like to participate in the novelty event starting at 6.00pm. Barefoot twilight bowls with names in by 6.00pm for 6.30pm start. Scale of prize money proudly sponsored by Bowls Committee will depend on the number of teams nominated. One game of 15 ends with the entry fee being $21 per team. Sausage sizzle will be available.

Saturday December 2 – No championship games are drawn but bowlers are invited to come along and have a rollup.
Sunday December 3 – Mixed Pairs – A Wyburn and D Bryant v P Taylor and J Middleton. B Webb and E Traves v M McMullen
and M Wilson. B Lees and M Rue v P Kennedy and T Fitzgerald. O’Brien Cup final – N Delaney and P Lees v K Walker and D Rollinson.
Coming event – Friday December 15 – Hams and turkeys will be the prizes for Twilight barefoot bowls on the night. Market nights from Wednesday December 6 to Friday December 22 will have hams and turkeys as raffle prizes.

WOMEN’S BOWLS
Twenty four bowlers competed in the Fun Day held on Tuesday, 28th November. The winners were, with the lowest score of 12, Janice Crump, Sandy McDonald and Christine Pickard. The Runners-up, with the highest score of 24, were Jenny Daly, Liz Thornberry and Jo Davies. The neatest card was won by Libby Balcombe. The Lucky Draw was won by Diane Slattery with No. 21.

The Point Score winners for November were Liz Thornberry and Marion Wilson. A very special thank you to President Betty Jenkins for the lovely sponge cake she made to celebrate two birthdays, Liz Thornberry who was 70 on Thursday 23rd and Moyna Rue who was 80 on Sunday 26th November. Moyna Rue specially thanked Betty for the cake and also said she was very proud to be a member of the Club, where everyone got on well. This was our last day of bowls for 2017.

We have a large group having a day out at the Orange Ten Pin Bowling Alley on Tuesday 5th December, followed by lunch at the Hogs Breath Cafe. On 12th December we are having our Christmas Party and Presentation. We return to bowls on Tuesday 16th January,
2018.