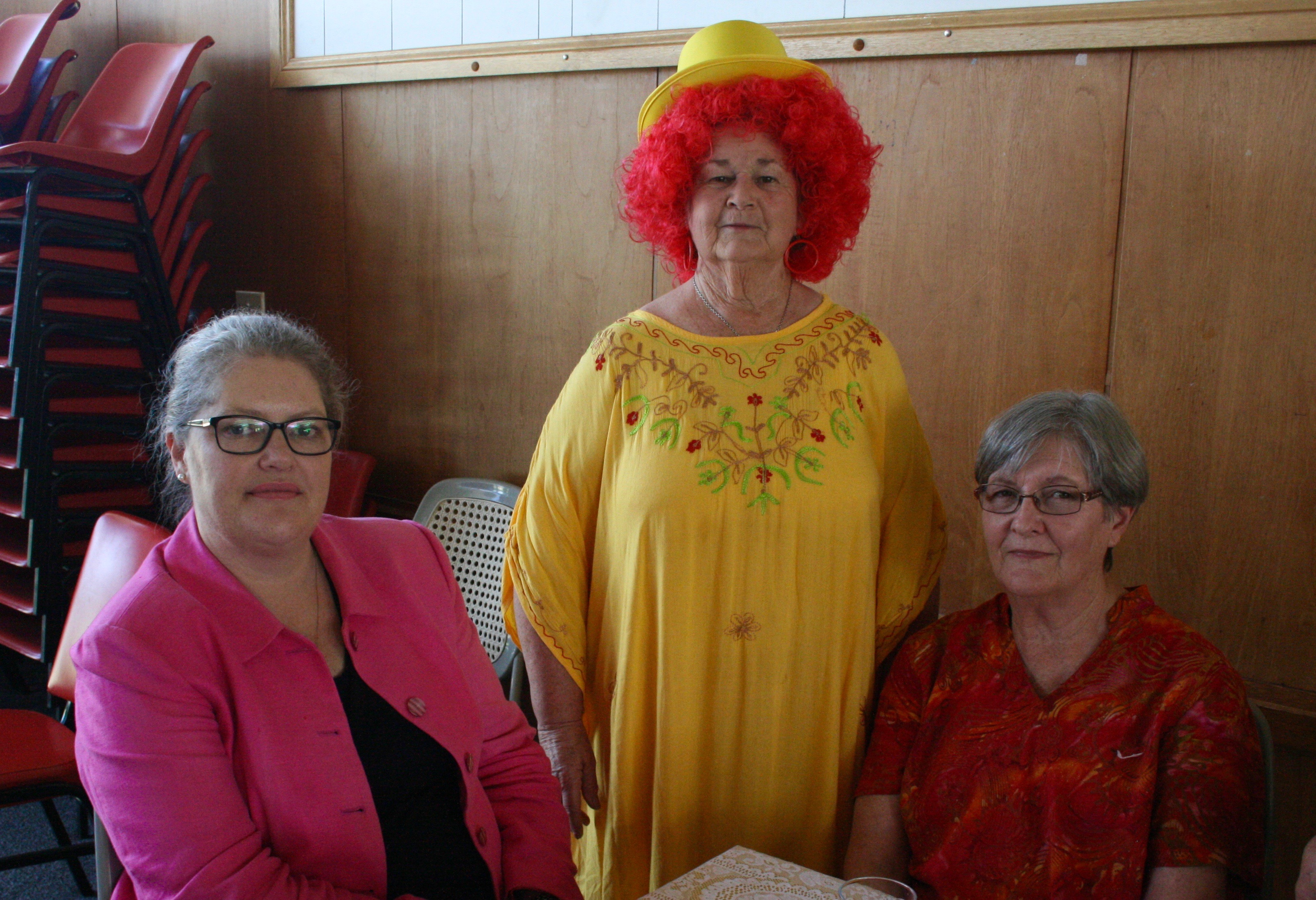 WOMEN”S BOWLS RONALD MCDONALD HOUSE CHARITY DAY
Tuesday 24 October saw Canowindra Women’s Bowling Club host the Ronald McDonald House Charity Day. We had 60 bowlers on The Ron Worboys and Harry Traves greens on a beautiful sunny day. The uniform of the day was “bright colours” and there were quite a number of Ronald McDonald characters roaming over the greens. The best dressed character was Marie Haigh via Bloomfield, Orange. Marie is always an amusing character on any green and her clown outfit with her purple shoes was the envy of the other Ronald’s.

Our guest speaker for the day was Catherine Nowlan, the General Manager of the Orange Hospital. Catherine spoke on the start of the Ronald McDonald Houses in the USA and then in Australia. The dream in 2005 to build one in Orange was realised in 2009 when the first sod was turned in Orange. There are 365 Ronald McDonald Houses throughout the world with 17 in Australia.

A cheque for $2,000 was presented to Catherine by Club President Betty Jenkins. This money was raised on the day with bowlers from Cowra, Forbes, Grenfell, Manildra, Orange and Parkes participating. Cheryl Kinsela spoke on her family’s experience with the Ronald McDonald House in Orange during the recent birth of her grandsons.

Cheryl praised the volunteers and the whole experience was one that would normally have been overwhelming during a difficult period. Winners on the day were the Forbes team of Jan Waugh, Annette Tisdell and Annie Walker. Runners up were Maureen Miller, Merilyn Rodgers and Cherie Frame. Lucky Numbers were won by Joice McNaught, Leanne Stevenson and Jill Messenger (Canowindra) Cherie Frame (Parkes) and Dawn Parker (PRD). Raffles were won by Jenny Daley, Betty Jenkins, Sue Slattery and Joe Davies (Canowindra).

A terrific day of friendship and comradery were had by all the bowlers and President Betty thanked her bowlers for their help especially the kitchen staff of Dianne Mooney, Radka Tatterson, Ellen Petty and Sandy McDonald. The spider was won by Christine
Pickard (Canowindra).

MEN’S BOWLS
Last Friday night eight teams competed in twilight barefoot bowls. The winners were the team of Mark Wright, Penny Nash and
Joyce Middleton while the runners up were the team of Tot, Tony and Betty. Last Sunday Bob Bates had a successful Presidents Day with 16 teams competing. The winners were the team of Peter “Freckle” Taylor, Allan “Westy” Wyburn and Phil “Leesy” Lees. The runners up were the team of Vinnie Mirto, Terry Mooney and Brent Lees. The round winners were a Cowra team, a Woodstock team and a Grenfell team. Thanks to the Bowls Committee for making the day run smoothly and also to Dool for his work on the greens during the week. Special thanks to Ken and Wendy for providing a beautiful Chinese buffet lunch.

Friday October 27 – Twilight barefoot bowls being mixed mufti turn around triples. Prize money proudly sponsored by Men’s Bowls.
Winners will receive $180 and runners up will receive $60. Names in by 6.00pm for 6.30pm start. One game of 15 ends with entry fee being $21 per team. First 14 teams accepted.

Coming event- Saturday November 25 – Mixed Mufti Day proudly sponsored by The Canowindra Phoenix with prize money of
$500. Teams can be men, women or mixed men and women. Two games of 15 ends. Wednesday badge draw is $250 and Friday badge draw is $700. Bingo this Thursday 11am.