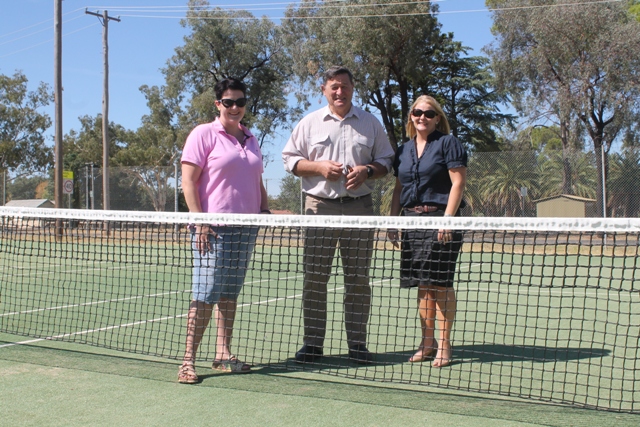 The Canowindra Tennis Club has been successful in receiving funding under Round 1 of the Stronger Communities Programme, as announced by Federal Member for Calare, the Honourable John Cobb MP. Mr Cobb said the club has received $5000 towards the construction of a tennis hit up wall, giving people the opportunity to enjoy the sport when they don’t have an opponent. “Tennis is a popular sport in Canowindra, with the courts being used for clinics, social players, local tennis groups and school groups. It’s great to be able to support such a vital community activity” Mr Cobb said.

Vice President, Jane Atkinson said, “it will allow tennis players to practice their shots and warm up prior to playing.” Expressions of interest under Round 2 of the Stronger Communities programme are now being assessed with $150,000 set aside for small capital projects in Calare.

Kylie Pull, President of the Canowindra Tennis Club, is pleased with the funding; “We would just like to say thank you to John Cobb for giving us this grant. We think the hit up wall will be a great asset not only to members of the Tennis Club but to all members of the community.”