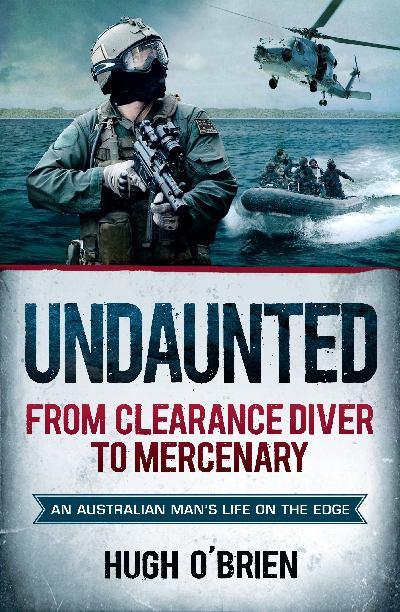 ‘Undaunted, from Clearance Diver to Mercenary’ is an autobiography by Hugh ‘Obi’ O’Brien, who grew up on a farm in Young, NSW. His lacklustre performance in both sporting and academic endeavours ingrained a sense of underachievement that would fuel his later success in the Special Forces.

After high school, Obi attended university somewhat aimlessly. After an encounter with a friend’s father who was a Clearance Diver, he applied for the Navy as a Clearance Diving candidate, and against all odds found success and acceptance with these subaquatic supermen. Later Obi applied for Special Forces with the Army’s counterterrorism unit, TAG (East), a secretive team of divers and commandos tasked with defending the domestic population from harm post-9/11. Admittance to this unit – their failure rate is in the eightieth percentile – was the defining moment of his life, the chance to serve where angels fear to tread and maybe, just maybe, feel worthy of the path less travelled.

In 2007, Hugh left the Special Forces and has since pursued a career in private security. He continues to seek adventure wherever it may lie, be it pirate-hunting in the Red Sea or mentoring soldiers in Afghanistan. This memoir is full of eye-popping anecdotes. It is for anyone who has ever dreamt of taking a high-action alternative route through life. It is at once tough, whimsical and funny, and always brutally honest. Undaunted would be an excellent Father’s Day present.

Obi will be talking about his book at Orange City Library on Thursday 14 August 5.30pm.