You are here: Home / Articles / Blue Skies and Blue Whales for Balloon Challenge 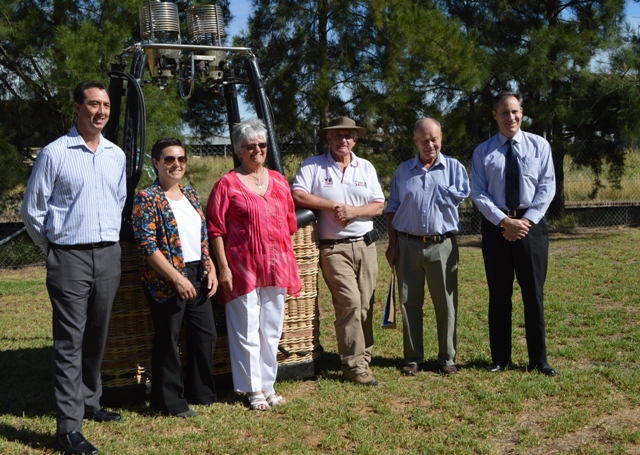 Although the envelope of the balloon was absent due to bad weather, the noise and colour of the burner still heated up the official Balloon Launch at Age of Fishes Museum on Tuesday.

Canowindra Challenge organisers, Jan and Graham Kerr, both gave speeches thanking the sponsors of the Balloon Challenge and stated that they have secured ongoing support for the next three years from Destination NSW. Graham also spoke of the local relationships the challenge creates; “When ballooners land in a farmer’s paddock they will always thank the farmer and give them a complimentary bottle of wine. Over the years we’ve strengthened these local relationships and in part that’s also thanks to our wine sponsors” Graham said. “We now also have an ongoing association with Parkes Elvis Festival so you might just see Elvis at the Balloon Glow, or someone who looks like him anyway!”

Andrew Hopkins, General Manager of Cabonne Council then spoke, apologising on the Mayor’s behalf who was unable to attend; “Cabonne Council is immensely proud of the Balloon Glow and we’re looking forward to the event this year, we wish all those involved the best of luck.” Last
to speak was Amy Raveneau, representative of Volunteering Central West; “We are a support service for organisations that use volunteers and became involved with Canowindra Challenge last year.

From 2015 there are 10 or so volunteers returning which is great but we’re still looking for more.” The event, which kicks off on 9th April, will be a three day spectacular which will include fire dancers, rugby matches, parades and markets. Jan Kerr also revealed
a surprise at the launch, “Today we’ve succeeded in getting Baby Blue to Canowindra, which is a specially shaped blue whale balloon and we’re hoping to secure two more special shapes.” If these exclusive balloons are secured it will be the first time they have been seen in the Central West.