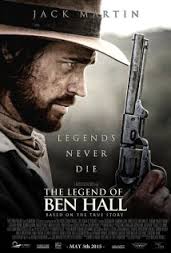 Forbes Shire Council, in partnership with Pinnacle Films, is excited to announce that the world premiere of The Legend of Ben Hall will take place at the Forbes Showground on November 12. The world premiere in Forbes will be the first stop in an extensive regional promotional tour for the film, which will see the cast and crew travel through regional NSW, Victoria and South Australia.

Mayor of Forbes, Graeme Miller said on behalf of the community he was extremely pleased that the world premiere was being held here. “Council has supported the film from the beginning and I am delighted they are bringing it back to Forbes to give local residents
the chance to see it first,” Mayor Miller said. Director Matthew Holmes said it was a privilege to be able to hold the world premiere of The Legend of Ben Hall in Forbes.

“Forbes is the heart of Ben Hall country and its rich colonial history – along with all the surrounding districts and towns – makes it the perfect place to launch the film,” Mr Holmes said. Shot in locations across regional NSW and Victoria, The Legend of Ben Hall is a visceral, action-packed epic that tells the story of one of the most wanted men in Australian outlaw history. With the bounty on their heads growing and nowhere to go, Ben and his gang must now fight to the bitter end.

The Legend of Ben Hall will be released in cinemas nationally on December 1, 2016. To purchase tickets to the world premiere visit https://www.stickytickets.com.au/44586