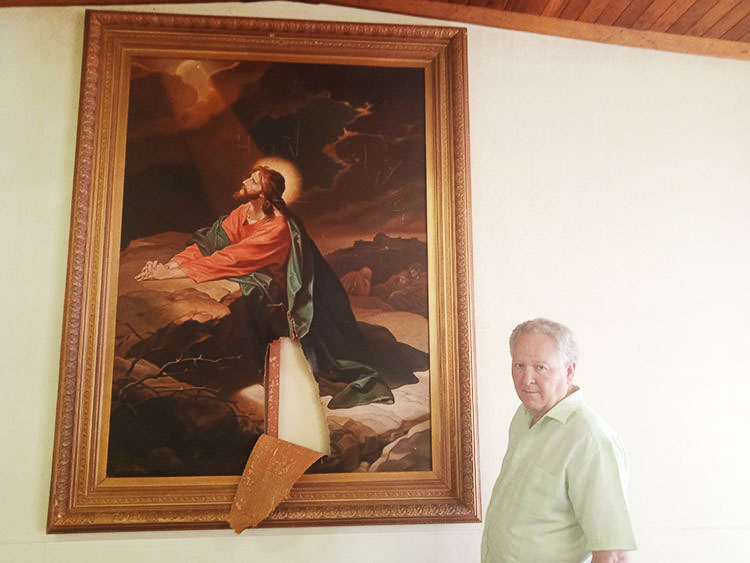 Father Laurie Beath inspects the painting that was damaged by vandals at St Edwards Catholic Church.

Sister Kathy Jennings arrived at St Edwards Catholic Church on Monday morning to discover the church had been vandalised.

“There are bibles and books everywhere, drawers pulled out, things just turned upside down and statues moved,” said Parish Councillor Margaret Wallington on the state of the church. “There’s been fairly extensive damage to many of the paintings of The Stations of the Cross and the largest painting of Jesus praying is extensively damaged with graffiti scratched into the painting.”

Following the discovery, police were called and arrived on the scene at 9:30am with Forensic Services from Bathurst beginning work in the early afternoon.

News of the crime rippled through the town in the following days. Father Laurie Beath, Priest of St Edwards, described the importance of the church to the Canowindra community saying, “It’s a very strong focal point. Canowindra is a supportive, very strong religious community, not only with the Catholic Church but the Anglican and Uniting Churches.”

Father Laurie went on to share his sentiments which echo many in the community. “It’s so disappointing that someone would go into a place that is regarded as sacred and cause destructive vandalism which doesn’t prove anything at all. It’s disappointing for the people of Canowindra because this has been a sacred place for them. The church buildings are more than just a building it’s part of the Canowindra community’s story.”

“We will clean it up and we will celebrate on Christmas and Sunday morning. For a lot of people they will not see the damage, except for the paintings which we’re going to leave on the wall so that people can see the damage that has been done.”

Adding that the church will in some ways get back to normal, while approaching their insurance company to see what they can do to repair the damage. “We don’t need this hanging over our heads,” Father Laurie continued.

This Sunday, the Catholic Church will share their service with the Anglican and Uniting Churches of Canowindra, a practice taken up during COVID restrictions. Father Laurie said that the churches have been aiming to become more unified by doing things like shared morning teas and meeting together. “There is a great sense of collaboration between our churches.”

The Reverend Joy Harris, who is the Minister of the Anglican and Uniting Churches in Canowindra spoke in support of St Edwards ahead of the combined Sunday service this weekend which had been planned before the incident occurred saying, “It was a horrible thing to happen at St Eddies but I think that this is a really good time to show a united front.” She went on to say, “That as difficult as this situation is, it is an opportunity for the Anglican and Uniting Churches to be able to worship with and support our Catholic brothers and sisters.”