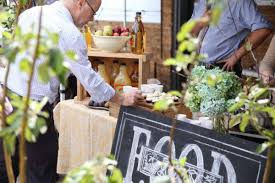 The ten day gourmet festival boasts six signature events and more than 90 member events in the 2016 program, running from 8-17 April 2016. From humble beginnings in 1991, when Orange F.O.O.D Week was established by a voluntary committee of passionate and committed local foodies, the event has evolved over the last 25 years into a gourmet festival of national standing.

“As we enter our silver anniversary year, we look back with gratitude to those culinary pioneers who helped put Orange on the map as a food and wine destination,” said James Sweetapple, President, F.O.O.D Week Association.

“Orange F.O.O.D Week has provided not only an excellent platform from which to promote the incredible diversity of the Orange region’s produce, but it has also served as a way to showcase and celebrate the impressive talents of our local producers, chefs, cooks, caterers, restaurateurs and wine growers.”