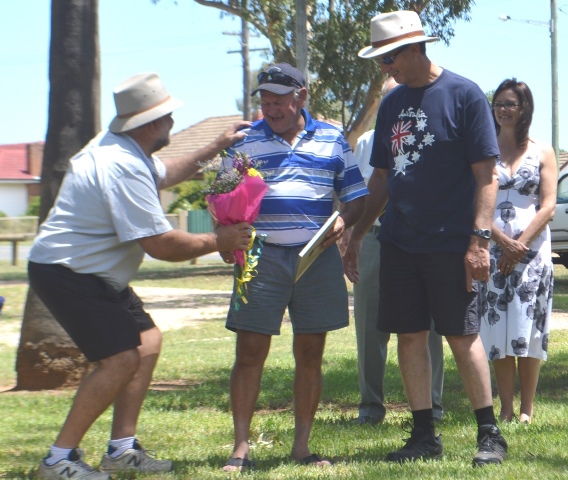 Festivities kicked off in a sunny Morris Park on Monday with a rendition of the National Anthem. Reverend Jonathan Williams then introduced Guest Speaker of the day Marion Wilson who said “I’ve been asked to focus on community and what it means to me… a community is like a spider web, everything’s connected.” Marion went on to describe her thoughts on community with the aid of four props, a painted plate, a dish from Turkey, a lit candle and a piece of cement brick. To end her speech Marion held up the cement brick and said “this brick may be chipped but it is solid, it holds together through thick and thin. We are just like the small pebbles and grains of sand inside this brick; we stick together no matter what.” Councillor Janelle Culverson went on to present the awards. Young Citizen of the Year went to Lucy Harrison who said “I am honoured and privileged to have grown up in Canowindra and will take all I’ve learned here with me when travelling overseas.” Lucy, who was a Canowindra High School Captain last year, is no stranger to awards, having previously received the Westpac prize for Best Literary work of the Year. Lucy is thoughtful and community minded, she assists with Lions Club events, teaches dance at the Public School and is a blood donor.
The next award went to Canowindra Rugby Union Club for Community Group of the Year and was presented by Con Guihot to Allan ‘Westy’ Wyburn and Graham Rice, complete with pretty flowers! Westy said “I’d like to thank the Club members and everyone who has supported the Club.” The ‘Pythons’ as they are better known, have been operating since 1974 and have donated to numerous causes over the years including raising over $10,000 for the McGrath Foundation in 2012 and donating $1000 to the Sports Trust for a defibrillator. Mark Brown, a long serving ‘python’, said “it’s great for the Club, great for all the people involved. The Club has put a lot of effort into the community and it’s nice to be recognised by Cabonne Council.” The last award of the day went to Tommy Jeffs for Best Australia Day Window Display although Tommy was unable to attend the ceremony. Marion and Lucy were then invited to cut the Australia Day cake and Reverend Williams rounded the presentation off with a chant of, “Aussie Aussie Aussie!” The revelry continued throughout the day in peoples back gardens and the towns drinking establishments. The Canowindra Hotel, which had a Bogan theme for the day, held its annual gum boot and thong throwing competitions in Memorial Park and boat racing competitions in the beer garden. Happy Australia Day to you all and we hope you’ve all recovered.
By Rhi Quinn