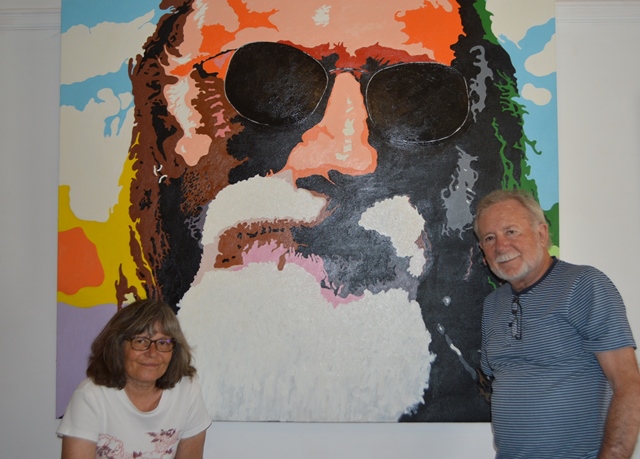 Around a decade ago Derek Maitland picked up a brush and started painting. Having never painted before he found he had a flare for basic shapes and block colours and began painting in bright acrylics on large canvasses. His wife, Jan O’Neill, shared in his new passion and chose a more delicate style by painting florals. Recently the couple have decided to go public and try to turn their hobby into a career. Derek and Jan started to sell their wares at markets in Orange and Sydney. “People would walk up to us and comment on technique and look at the pictures but then they would walk away” says Derek. After becoming slightly dispirited at their lack of success they tried a different tack and went online for marketing. “Art Alive” was born last month with a Facebook page and website in progress. “We realised we were onto something when galleries suggested marketing our pictures” says Derek, “galleries are fantastic but they’re decreasing all the time. Artists need to use technology if they want to survive and become known.”
With the canvasses beginning to pile up in the house Derek decided to renovate the two old, rotting sheds in their back garden. One was transformed into a studio and the other is soon to become a pop-up gallery, ‘The Rodd Street Gallery’, which will be open for passers-by to have a browse periodically. Derek’s favourite piece so far is affectionately named ‘The Dude Who Sees All’. “He was an old hippie sat in the park near Darling Harbour while a festival was on” says Derek, “ I couldn’t resist taking a picture of him!” Derek then took this photo and used it as a comparison to paint ‘The Dude’. “He’s kind of become my pal, we’ve put him on our lounge wall.” Derek’s excitement is catching and I’m soon inspired to have a go at painting aswell. “At 72 years of age, it’s fantastic to have something so fun happening. It makes us feel alive!” Derek said. We look forward to visiting the pop-up gallery in the near future.
By Rhi Quinn