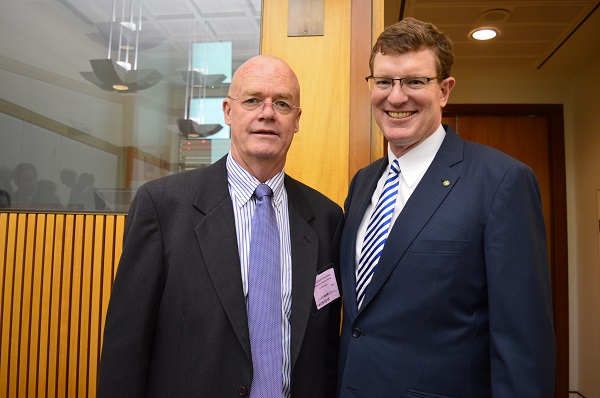 New Member for Calare Andrew Gee delivered his maiden speech in Canberra last Wednesday flanked by his fellow party members, including Barnaby Joyce, the leader of the Nationals, Senator Fiona Nash, deputy leader of the Nationals, and Michael McCormack MP, who has taken over some of the previous Calare electorate and many other National Party members. Also present were many friends and family who Andrew has known for many years and who he thanked at the close of his speech. Locals to attend were representatives from Cabonne Council, Peter Carman from Cudal and Cheryl Newsom from Canowindra.

In a dedicated speech to the fantastic assets that Calare has, Andrew called for better education and health west of the Great Dividing Range.

Andrew said, “The ‘Great Divide’ was not only a physical one between the city and the country but, for many in the region, represents a divide of opportunity, representation and development and nowhere is that divide greater than in education.”

Andrew identified that the divide also exists in medical services, with people in the country having shorter lives than those in the cities.

“We have worse outcomes for diabetes, cardiovascular disease, cancer, mental health and obesity. We die younger and that is the cold hard truth.”

Andrew went on to call for a new expressway over – or tunnel under – the Blue Mountains, which would open up the communities of the west. “If the money for an expressway cannot be found at present, the federal government needs to follow the lead of the New South Wales government in putting some serious funding down to help upgrade that road now.”

In a wide-ranging speech, Mr Gee called for incentives for manufacturing in the Central West through taxation concessions and a national, targeted manufacturing strategy, better export protocols to get agricultural products into Asian markets and federal assistance for water security projects in the west.