Home » All For Nun And Nun For All! 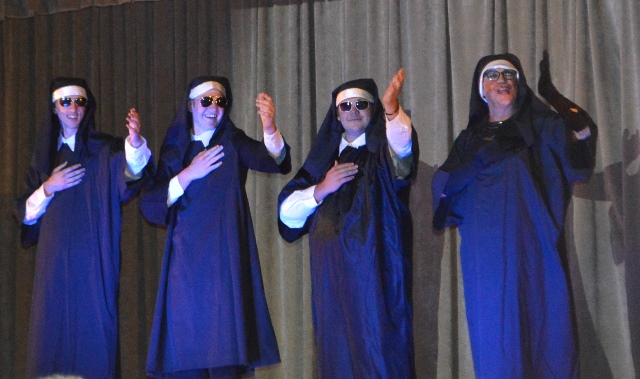 Canowindra was blessed with the show of the year on Friday night! Tommy Jeffs and his High School helpers gave the Services Club the ‘Hollywood’ treatment with a range of acts including Doris Day, Pricilla, John Travolta, Olivia Newton John and of course Tallulah all played by the talented Tommy Jeffs. Other performers included Luke Campbell, Mr. Jeffs godson, who belted out a rendition of Billy Joel’s ‘Piano Man’, Mckenzie Lazarou who sang ‘Gravity’ beautifully and Peter Starr who blew the audience away with ’Gingerbread Man’.
“They took something away from the school and we wanted to take it back” said Tommy. “You can’t let some ****holes take away your spirit. The aim of the night was to raise over $10,000 and we’ve done it.” Most of the money will go towards the school canteen. The much appreciated money was handed over to Principal Neryle Smurthwaite at the Deli Lama on Tuesday. “I can’t thank Tommy enough” she said, “ he turned something bad into something good. On Friday it wasn’t just staff and parents in attendance, there were people from all walks of Canowindra. I’m amazed at the positivity and spirit of our community.” People travelled as far as Canberra, Sydney, Port Macquarie and New Zealand to see the show and ex-students who couldn’t make it sent money in support. “They rave about city kids, look at your town and your kids” says Tommy, “I’m honoured to work with them.” What began a little idea that went mad has put the heart back in Canowindra, “it’s a great end to the year.”
By Rhi Quinn