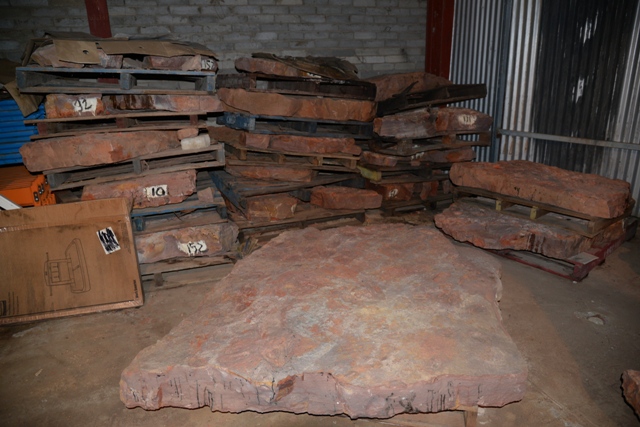 Canowindra’s well-known Age of Fishes Museum desperately wants to be able to move it’s huge collection of fossil slabs on site at the museum, and Manager Warren Keedle says a State Government grant would make that possible. The museum has applied for a $300,000 grant under the State Government’s Club Grants Category Three Program, and should they be successful in obtaining the grant, Cabonne Council has promised to match that grant.

This would give the museum $600,000- enough to build a storage facility on site at the museum to house approximately 300 slabs of fish fossils that are not currently on display in the museum itself. However not only would the new building house the extra fossils, but it would also double up as an educational facility, where school students could visit it, pull out the storage fossils in their trays from the walls, and do hands-on learning with them.

At the present time, the 300 extra slabs of fossils are being held underneath the grandstand of the Canowindra Showground, and with the conditions in that room being cold or hot, depending on the time of the year, and humid, the slabs have gradually been damaged. Mr Keedle said it was imperative the museum built a new storage facility to better maintain the significant pieces of history. “The new facility would be climate-controlled, so we could hold them without risking them becoming damaged,” he said. “Because of their current state underneath the Showground grandstand, we cannot move them manually, and need a forklift to come and do it for us.”

“Once they are being maintained appropriately as well, we will be able to apply to have them heritage listed.” The same 300 slabs have been underneath the Showground Grandstand for the
last 20 years, and given they are world-class specimens, Mr Keedle said they needed to be stored in a professional facility.

In the long term, Mr Keedle also hopes to be able to re-visit Fish Fossil Road, dig up a part of the road, and search for more ancient fish fossils. He would then build a glass-bottom walkway over the top of it so people can view the fossils in their natural setting.