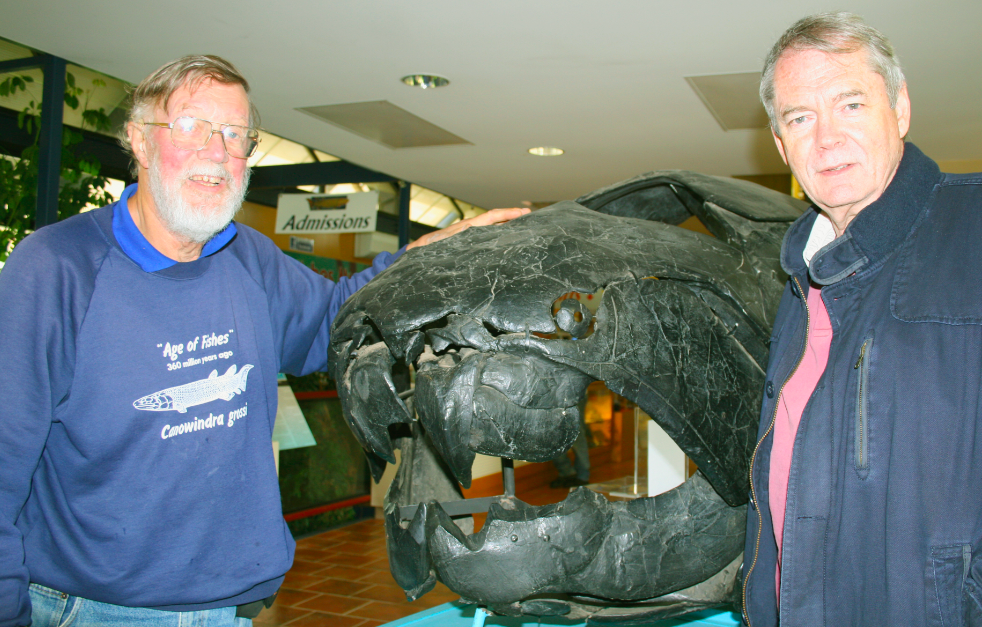 One of Warren Keedle’s first tasks as new manager at the Age of Fishes Museum last weekend was to play host to the eminent palaeontologist, Professor Alex Ritchie, who headed the search and discovery of the museum’s 360 million year-old fish fossils in 1993.

The 78-year-old Scottish-born former palaeontologist at the Australian Museum in Canberra brought with him fellow scholar Prof Michael Archer and a busload of thirty second-year earth science students from the University of New South Wales.

And he made it clear what his priorities are now that he, as he says, is “running out of time.”

He wants to complete the museum, doubling its size and adding to its many tonnes of hitherto unseen fossil-packed rocks stored at the Canowindra Showground and even more tonnes still unearthed at the fossil site.

That, and resolve a dispute which he says he’s having with Cabonne Shire Council over who actually owns the fossils.

“Cabonne Council claims ownership of the fossils,” he says, “but they should be owned by the state, the people of Australia.

“I don’t think the shire council has the money or expertise to control them.”

Prof Ritchie certainly knows what they’re all about – during his long career he specialised in fishes from 480 million years ago to the Devonian period 120 million years later which produced the Canowindra fossils.

He describes them as “potentially one of Australia’s most important scientific, educational and tourist natural treasures,” and echoes David Attenborough’s view during his visit to Canowindra last year that the fossil site itself is “probably the world’s finest.”

Also, Prof Ritchie says the current Age of Fishes exhibition is only a tiny part of what’s actually available out in Canowindra’s fossilised rock-site that was once the bed of a lake packed with astonishing armoured and pre-amphibian fishes during the Devonian age.