You are here: Home / Articles / A Sad Loss For Cudal

At about 7pm last Tuesday night, the Royal Hotel in Cudal was engulfed by flames, and although nobody was physically injured in the fire, it was still a heavy loss for Cudal.

100 years of the town’s history were destroyed by the fire, as helpless Cudal residents looked on including Cudal’s sporting memorabilia and photos.

The Royal, built in 1914, was a historic building; one of the first built in the town. Locals say the pub would have been used by those farmers travelling the stock route.

The fire was quite devastating for the bar staff, patrons and small community of only 400, who lost the only pub in town. It was a place for locals to congregate, celebrate and socialise. It was a place where visitors could meet characters from the community.

The quick response to the fire from Cudal Rural Fire Service was commendable, and fortunately none of the neighbouring buildings were damaged.

The fire is believed to have originated in the hotel kitchen before gutting the interior and collapsing the roof. An investigation is underway to determine the cause of the fire. 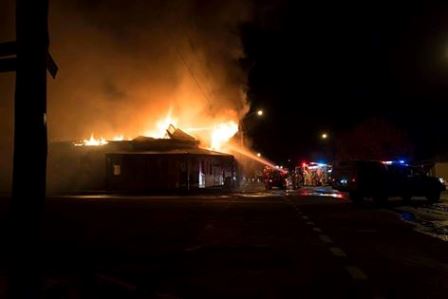