Home » A Sad Goodbye to Canowindra 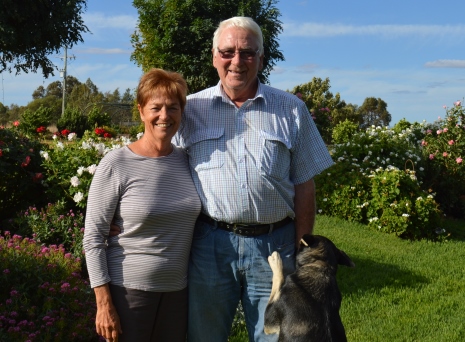 After buying Sunnyvale in 1993 and moving to Canowindra in 2005, Paul and Pauline Laurie are packing up shop and moving to the Sunshine Coast after a decade of local living. Sunnyvale, which includes 433 acres, was sold to Wayne and Anne Lamb of the Golden Gate Horse Stud. Paul and Pauline moved here from the Southern Highlands over 10 years ago, seeking a property that would be drought proof. Unfortunately they hit nine years of drought in this area and are saddened to once again see the countryside so dry. Paul made a living running Angus Cows, crossing them with Romagnola, Limousin and Angus bulls. He sold off his herd in 2009 to concentrate on growing crops including sowing canola, wheats, oats and barley, supplemented by 360 first cross ewes. The couple say they are sad to say goodbye to all of their Canowindra friends, especially Pauline’s golfing buddies. The couple both feel that Canowindra has been very supportive of them and will miss the family and friends they are leaving behind. “We would like to wish Wayne and Anne all the best in taking over Sunnyvale” said Paul.
By Cheryl Newsom