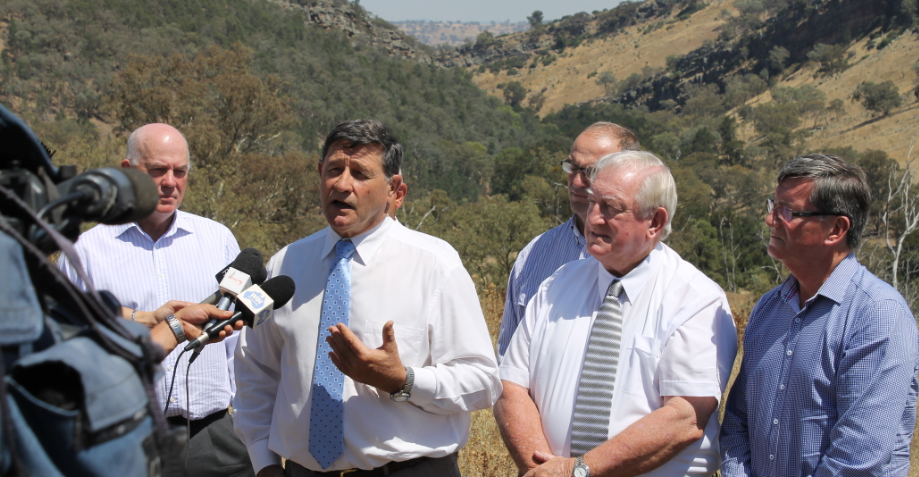 John Cobb with Tony Perry, John Davis, Scott Ferguson and Gary Rush at a media interview at The Needles

It’s not often that Friday the 13th is a historic day, but that was certainly John Cobb’s glowing description of last Friday when he announced the NSW government has committed itself to the Needles Dam project.

The dam, to be built in The Needles Valley between Canowindra and Mandurama on the Belubula River downstream from the Carcoar Dam, has been proposed by the Calare federal MP for more than a year and was given very little chance of success in view of budget axes.

But NSW Deputy Premier and Nationals leader Andrew Stone now says the project has his backing, and further details of the government’s support were to be released with the State budget on Tuesday.

“This is an incredible outcome for the people of Calare – I’m ecstatic,” John Cobb says.

It’s a good win for Canowindra and Mandurama too – apart from the estimated 90,000 mega litres of water the dam will store, its construction is expected to provide 300 to 400 jobs.

Says Mr Cobb: “I believe this project will lift the spirits of the Central West and will inspire all of regional Australia.

The Carcoar Dam was planned to be built at The Needles site about 40 years ago, but was established close to Carcoar in the wake of political wrangling.

It’s always suffered from having a very restricted catchment, compared with the 532 square kilometres available at The Needles, and the number of creeks flowing into it.