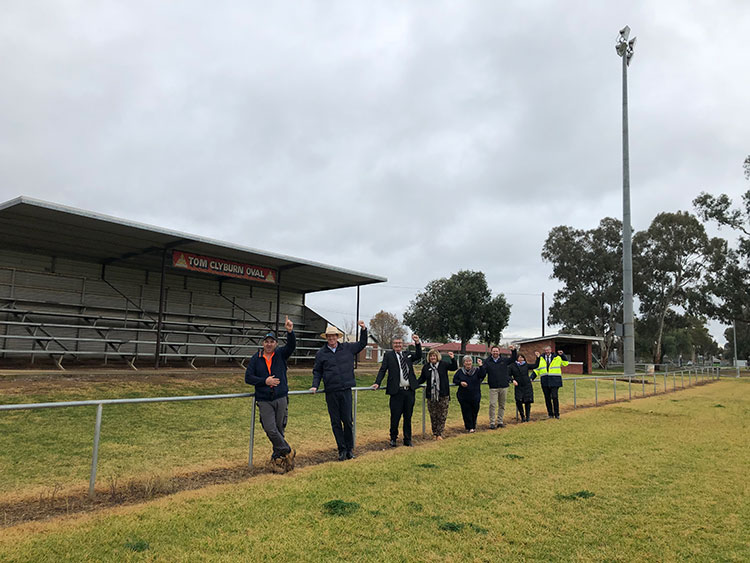 The Australian Government is committed to supporting country people with an $839,491 investment into Cabonne communities through Round 4 of the Building Better Regions Fund.

Seven projects that were proposed by Cabonne Shire Council and community groups received grants, with the funding going towards an array of community development initiatives.

$200,000 will go towards a lighting upgrade at Canowindra’s Tom Clyburn Oval.

The upgrade will include improved light towers at the oval, located within the sporting and recreation precinct of Canowindra, which incorporates the fitness path, skate park, tennis and netball/basketball courts.

Mr Gee said “Improving lighting across this sporting precinct will expand both its use and safety at night by the fifteen clubs that use it regularly, and for those using the walking paths.

“It will also increase the appeal for visiting teams while lowering operating costs with the increased efficiency of the LED lighting. The sporting community of Canowindra asked for this upgrade and I’m delighted we’ve been able to deliver,” Mr Gee said.

“This will assist our Local Government Area, offering a significant boost to some of our local services and community facilities,” said Cr Beatty.

“Programs such as Building Better Regions contribute greatly to rural areas, and are important to the future growth of the Shire.”

Other projects to receive funding include:

• $492,410 will go towards the construction of a new multi-purpose community centre and event space at Eugowra Showground which will also act as an emergency evacuation centre if required.

• Cudal Showground will receive$95,091 to upgrade power and water infrastructure.

• $200,000 will go towards new LED lighting at the Dr Andrew Ross Memorial Recreation Ground in Molong.

• $50,400 will got to Manildra Pre-School Early Learning Centre to upgrade existing bathroom facilities.

• Molong Showground will receive $170,000 to replace and improve the amenities at the showground.

The $492,410 in Eugowra will contribute to the first phase of construction of the facility. It will provide Eugowra and surrounding communities with a facility large enough for functions, including a kitchen. It will also act as an indoor sporting centre, entertainment facility for concerts and other events, and an improved evacuation centre for Eugowra and surrounding districts.

Mr Gee said “This Centre will take community facilities for local residents to the next level. It will offer tremendous benefits for the sporting community and events sector, while providing a safe place for people to go in times of emergency.

“Cabonne Council and community group representatives have worked very hard together to develop their proposals and the success of these project funding applications reflect that,” said Mr Gee.

“The benefits are far-reaching for many community folk, ranging from showground and sporting facility upgrades, to preschool centre refurbishments, to community and medical centre upgrades and more.

“With projects being spread across five towns in Cabonne it’s a terrific result for these communities who can share in the funding allocated,” said Mr Gee.