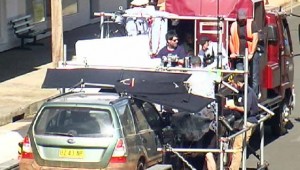 If you were a tourist visiting Canowindra for the first time last week, you could have been forgiven for momentarily wondering if you’d lost your way.

The River Bank Hotel was now the “Nathgari Library.” with signs outside it for “Choice Credit Union,” “Countryside Cabling” and “Supporting the Nathgari Community.”

The Royal Hotel now had a sign announcing the “Nathgari Sporting Carnival” set down for March 30, a store across the street was now “Second Hand Goods and Bric-a-brac” with a very confusing phone number – 3764 3254.

Of course, it was all part of the makeover that transformed part of downtown Canowindra into a red dust-blown bush town beyond Broken Hill for the week-long on-location filming for the movie Strangerland.

With Nicole Kidman, Hugo Weaving and British Shakespearean actor Joseph Fiennes here as the stars of the shoot, Gaskill Street naturally attracted crowds of locals and visitors no doubt hoping to catch a glimpse of them.

Instead, they mainly saw how incredibly technical a movie shoot is, why feature movies end with an agonisingly long list of crew and production credits and, most illuminating of all, how you film close-ups of actors in a moving car without its wheels ever touching the ground.

As many of us saw, the technique these days is to get a big trailer truck then load the entire set on to it – lights, sound and monitoring first, then stills and more monitoring, then the camera rostrum and camera with technicians, then the car itself covered in shade screens and reflectors, and drive the whole shebang up and down the street, take after take, to get the right shot.

The filming ends tomorrow (Friday) and the cleanup of the dust-strewn Gaskill Street footpaths and storefront with it.

And the mythical “Nathgari” becomes our own Canowindra again.